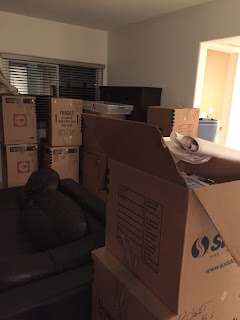 Moving a house and an office is nerve -wracking. I read a lot about moving before we decided to move, and we did most everything recommended but I realize now we should have done more --

Get rid of more stuff before you move. We got rid of a lot, but we also moved a lot of stuff we could have left.  After the move we donated a truck load to Salvation Army and our trash guys are saints for all the trash they haul out weekly.

Unpacking takes a lot of time. It’s not just about unpacking the boxes it’s about where the stuff goes and figuring out a new system. I have moved stuff around several times much to our kid’s frustration. Their snack drawer got moved twice!

Setting up an office in the new home – this took a lot of thought and I still don’t have it right. I like my location and my view out the window, but my storage and desk are not big enough. Again, new location, new layout means new desk, new storage and new habits. I’m still working the kinks out.